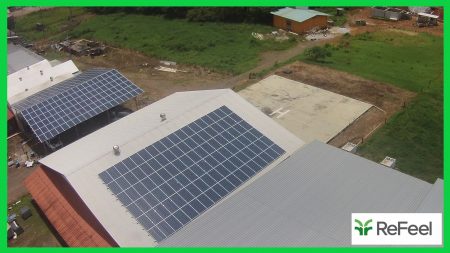 ReFeel Panama SA celebrates the connection to the network of a new solar photovoltaic generation plant on a workshop and heliport hangar, located in the city of Panama City.

The solar generation plant of nominal size of 90.72 kWp consists of 336 solar panels of 270Wp. Our client, responsible for the environment and aware of the high costs of electricity, has decided to invest in clean generation, and taking advantage of the net metering scheme, began to produce its own green energy, saving considerably on its electricity bill and lowering the carbon dioxide emissions.

ReFeel Panama SA is an EPCista company (Engineering, Procurement and Construction) with the possibility of providing a subsequent customer service for maintenance and monitoring of the plant. ReFeel Panama SA, is a subsidiary of ReFeel International, with offices in Italy, Switzerland, Panama, Brazil, Colombia and Costa Rica. The Company has developed plants that total more than 280 MW worldwide.