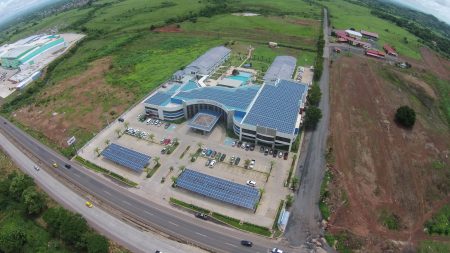 On May 10, 2016, ReFeel Panama celebrated the connection to the grid of the solar power generation system installed at Hotel in Panama.

The plant, a 512.20 kWp solar power generation system with 1920 solar panels, is one of the first Hotels in Panama and the Central American Region with such capability.

The Hotel, conscience with the environment as well as the higher cost of electricity, decided to invest in several energy saving methods, the most important, the ability to produce its own energy.Â The size of this plan is equivalent to the annual saving of greenhouse gas emissions from 90 passenger cars, or CO2 emissions from 53,631 gallons of gasoline consumed annually. In addition, this size plant will be generating savings of about 70%* in their annual electric bill.

ReFeel Panama is a solar EPC (Engineering, Procurement, and Construction) company with the possibility to continue serves the customer with maintenance and monitoring of the plant. ReFeel Panama, is a subsidiary of ReFeel International, with offices in Italy, Rumania, Switzerland, Brazil, Costa Rica, Colombia and Dominican Republic. The Company has developed plants totaling more than 280 MW worldwide.